Life 2.0: Your Next Act With Zanna Foley-Davies 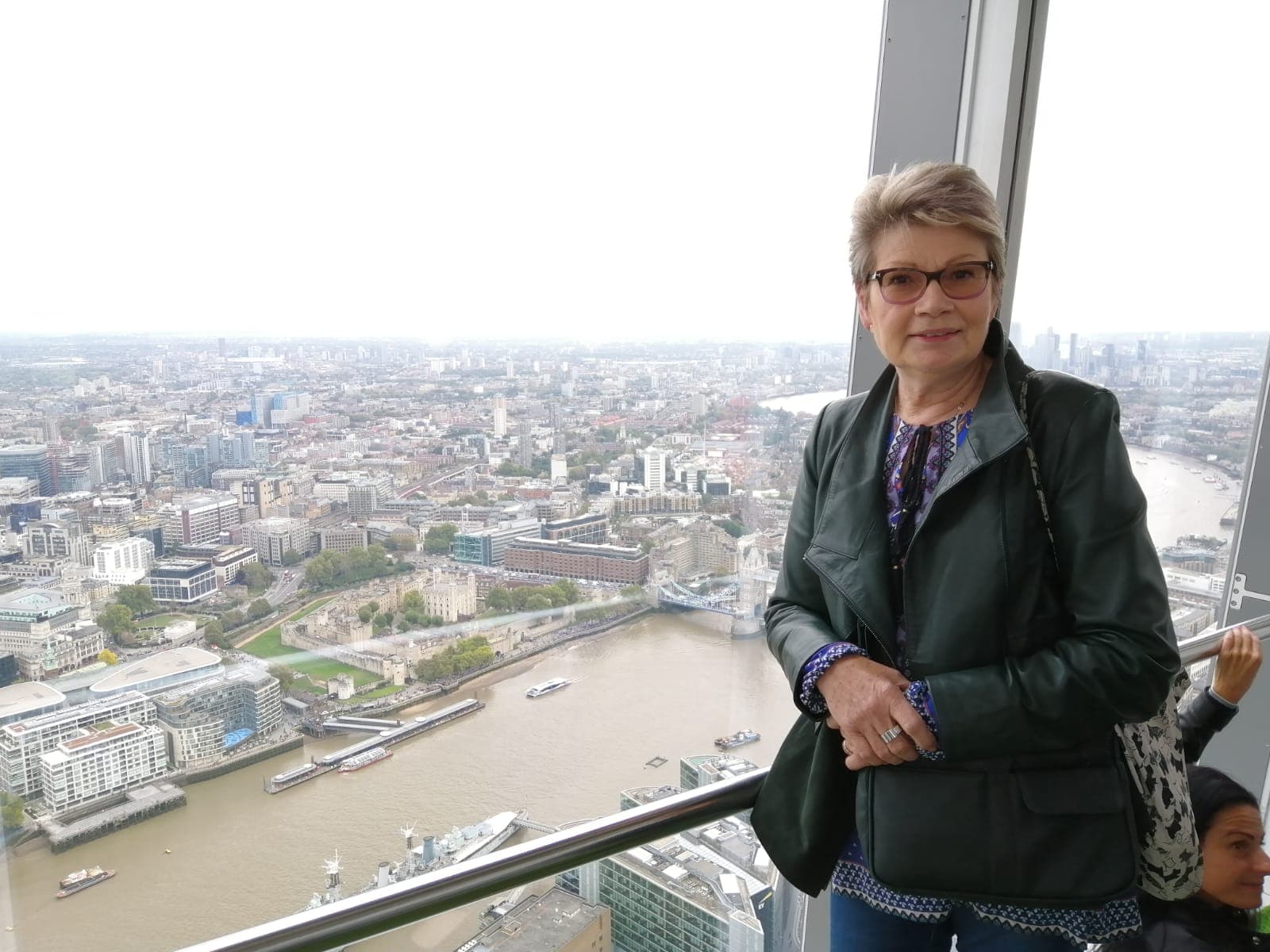 To escape the pouring rain hammering overhead, I sat down with Zanna Foley-Davies in her home.

She sat snuggly in her conservatory, walls lined with thriving foliage, as the wind bent trees behind her; she strikes me as a woman of grace and perseverance and, through her clever planning, insulated from the elements battling outside.

(“On Saturday we went to the Apollo and saw Everyone’s Talking About Jamie – you need to go see it. I cried, cheered, whooped – the whole audience gave a standing ovation!” She tells me, thinking back to the atmosphere only two nights ago. “The noise! The love, the tolerance, the acceptance!”)

To start with, I ask her about her career and how she’s spending her Life 2.0:

“How do you fill your time?” She laughs. “What time? I’ve never been busier!”

Her goal for Life 2.0 had always been to grow old colourfully (“never beige!”) but that was hardly a plan. Indeed, Zanna credits people she’s met in pubs or cafes for directing her towards her next act. Spontaneous conversations open doors she hadn’t known about but raced to explore in Life 2.0. 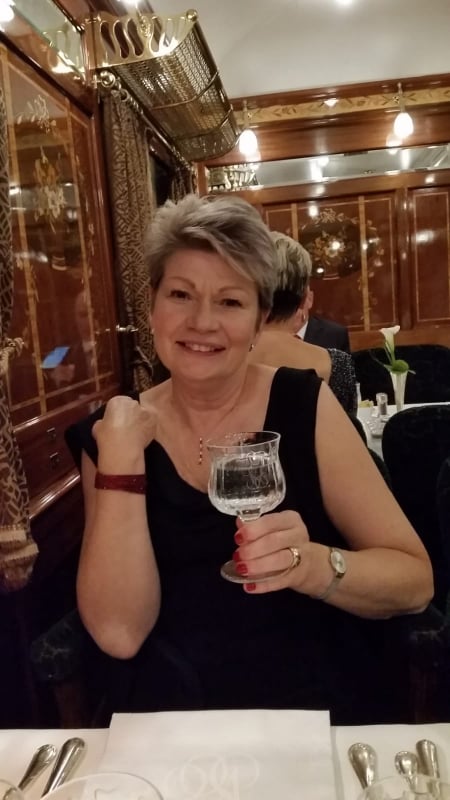 She tells me that she never wanted “to look back and say, ‘I wish I’d done that.’” Instead, she jumps in: “just open your eyes and do it!” is her philosophy.

With regards to her career, she prefaces her story with a warning: “some people get a job and they do it for years, but their heart isn’t in it.” This was something Zanna strived to avoid. She pursued her passions exclusively, travelled to chase them, and later combined her dream careers into her own business and lifestyle.

Her first career began in her twenties when she taught in a primary school– and she loved it. She progressed to deputy head and began to think about her professional future.

She grimaces. “The more I looked at Headships the more I realised it was nowhere near children. It was all going to be managing people and phone calls and stuff, which is not me.”

She contented herself with teaching and initially looked no further.

When her partner moved to Ireland for work, Zanna followed, veering away from an unsuitable promotion. By the time they returned to England, Zanna had specialised in improving adult literacy and volunteering by heading a summer activity scheme for 200 children over 4 weeks.

“But then we had the imposition of the National Curriculum which completely destroyed my creativity. Couldn’t teach to a test, I just couldn’t do it. I was very unhappy. So I left teaching altogether.” After over two decades in one industry, I asked Zanna what she did next. What did she instinctively turn to?

“I harnessed my passion, which was gardening.” This became her second career. “I set up a gardening business on my own and it quickly became an unmanageable business because I had too much work.” While the success was rewarding, it was physically intense work and after four years, Zanna needed to innovate.

“I was there for years! Absolutely years! But again, in time, I got bored.”

“I worked with people with moderate to severe learning difficulties. I realised there was another career strand there. I discovered that there was something called a "horticultural therapist.”

People ask, “Does that mean you talk to sick plants?” And I say “No, I grow people.”

“Which is what I did, and I loved that. It involved me going to uni for the first time in my 50s and graduating with a post professional diploma in social and therapeutic horticulture. And I did that right up to 60 years of age” which is when she started to think seriously about her life after work.

Even knowing she could cope financially, Zanna was “scared of retiring.” She didn’t know what she would do; would there even be anything to do?

“I kept my passion, which was initially teaching, and I’ve moulded that with gardening. But at 60 my battery was dead; I couldn’t give any more. So I entered my first retirement.”

This involved volunteering for two days a week in a church garden. “The rest of the time I was at home.” She began to bore of the sedentary days in the house with the dog, and her decreasing capacity to care for the gardens. Her battery soon recharged, and she reminded herself of her goal: to grow old colourfully.

“My second retirement began three years ago – and now I use the skills that I have to teach people gardening in their own gardens, I love that. I do a bit of garden design; I show people what they could do. I give talks at horticultural societies on recycling in the garden.” She pauses and reflects: “I am a resource.”

“Money doesn’t matter. What does is that I don’t lose what I’ve built up in my head: what I know.”

“And it breaks my heart to see others totally sedentary. My husband is one of them. After more than 20 years of having to go where the work was, both here and abroad, he never had time for hobbies. He sits, and I go. I’m away for weekends, and I go to gigs, and I visit friends. It’s been a complete change-round in our marriage: he’s at home with the dog and I’m out having a great time.”

So what does Zanna do with her time?

She fell into theatre.

“I had never been on the stage, but a lifetime of teaching makes you an actress.”

In her first ever audition, instead of getting the smallest part in a big show as she planned, Zanna scored the biggest lead role.

“I was hooked. And little by little I did more here and there; I joined new theatre groups, and committees. After a while I became a stage manager and was shown how to do that. And one day I was watching a rehearsal and I thought ‘I could do better than that. Why doesn’t she see why this scene isn’t working?’ so I went on to directing. It went from acting to ASM to SM to Directing – and it was all muddled in together. And it’s lovely. It’s what keeps me alive.”

Zanna tells me about the ecosystem of theatre circles: “It sounds like a weird thing to say – but it’s this wonderful thing coming together of experience and youth. And this energy has kept me hooked.”

“I’m socially very busy.” As a member of the British Red Hat Society, a playgroup for older women across the country, Zanna partakes in a wide range of social activities, city breaks and trips abroad, and seasonal shows put on by members. “It’s very silly, it’s complete anarchy. And again, it’s performing and enjoying my life. I didn’t realise how much performance would become a part of my retirement.”

By staying curious and flexibly pursuing opportunities to see if they’re for her, Zanna is living colourfully. 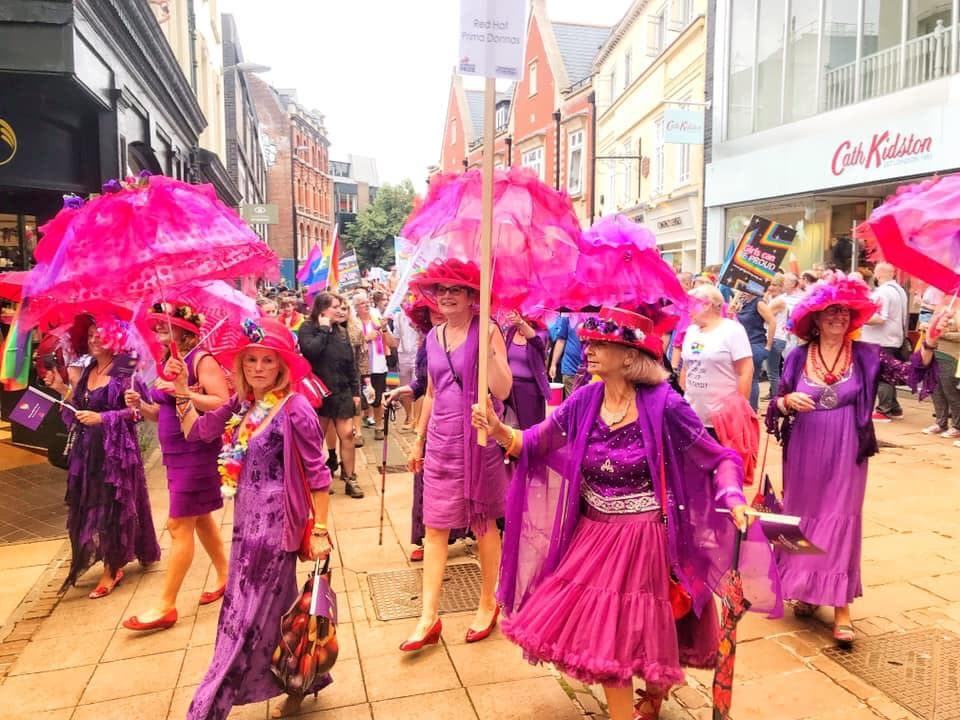 “In this very room” Zanna tells me, “I was recorded for a soundscape for Richard Hand’s Romeo and Juliet.”

Voice acting for radio productions is her current jam: “the radio stuff is absolutely magic because you don’t have to learn any lines!” In radio performance, since the audience cannot see the actors, directors are free to mime instructions to them.

“I love it! I absolutely love it! Loads of things I had to do! And he just pulled faces at me and I had to deliver them in different ways. Wow, that was interesting.”

When she thinks about retirement now, Zanna knows it’s what you make of it. “I can’t explain it to you in any other way: I don’t feel as though I’ve retired. I cannot work out how I used to do the things I do and work.”

Before I can ask what else she’ll add to her plate, she jumps in:

“What’s next? What’s my next career going to be?” It’s pure excitement she shows, dances, celebrates in. “It might only last for a few months or for years” before she transitions to her next thing, but that seems to be the joy of it. The freedom to pick a new career every other day, if you wish, and try things you never knew you’d love.

The end of one adventure is the opportunity for another to begin.

Stories about people and things that we enjoyed...

Fifty shades of green: the world of sustainable investment

Investment Analyst Radostina Dencheva contributed an article on the future of socially responsible investments to the recently launched publication, 'Visions of a Sustainable Future.' (2019). This collection of thought pieces form a multidisciplinary perspective on the key challenges and transformations facing us all in ensuring a sustainable future.

Find out more about Fifty shades of green: the world of sustainable investment

Libby Toms: My Month at Chadwicks

We enjoy having young people working with us to gain experience of work in the 'real' world. Some are here for a week, some for longer. Libby spent a month with us over the summer and here are her reflections.

Find out more about Libby Toms: My Month at Chadwicks

Chadwicks is proud to sponsor the Norfolk Knights, a fantastic mixed-gender wheelchair rugby club; sponsoring friendships, rivalry, competition, and accessible sport in Norfolk. There are unfortunately few opportunities to access adult disabled sport in our county, and the positive impact sport can have on a person with any form of disability is transformative.

A World of Milk

Content Consultants, are committed to developing a full understanding of their target audience as the first step towards building the perfect solutions for their needs. As such, they conducted focus groups with women to learn more about what was preventing Mexican women from breastfeeding. The women told them that advertisements had convinced them that formula milk is better than their breastmilk. What a topsy turvy world!

Find out more about A World of Milk

During 2018 we've been supporting Ormiston Families' MPower project that supports parents who have had a child taken into care. The Mpower project has made a significant impact on the lives of vulnerable women who are largely forgotten in society. The grief and loss they suffer on top of the other challenges they face in their lives is hard to bear.

A hut at night? Shepherd's delight!

For those fond of glamping, the answer can be delivered to your doorstep in the shape of an English Shepherd Hut, and you don’t have to tend a herd of sheep to get one. The huts combine the timeless traditional charm of a historic hut with countless modern innovations to make them both beautiful and functional.

Find out more about A hut at night? Shepherd's delight!